Tiger Tim said:
While rare, strut-braced low-wings do exist. The strut would probably have to be a little heavier to resist buckling but the rest of the structure in that airframe has to be pretty close to what you’d need to move the wing down.
Click to expand...

Callair, Fleet Fort, Ryan PT-22, Spezio Tuholer, Stitts Playmate, Volksplane and many crop dusters.
We seem to have talked oursleves in a circle.
The primary addition to a 21st century Volksplane is a stiffer cockpit structure to reduced wing twisting. I often thought that V-struts would serve that purpose by triangulating wing loads to the instrument panel bulkhead.
A secondary advantage is easier broading over the trailing edge.
A third advantage is easier wing fold, more like Stitts Playmate. Routing control cables along the rear spar simplifies un-folding.
B

This aircraft seems like a great Volksplane candidate. Currently powered by an electric motor, it has also flown with a paraglider motor.


Though limited to local flying in calm conditions, it has a quiet magic carpet appeal.

This aircraft seems like a great Volksplane candidate. Currently powered by an electric motor, it has also flown with a paraglider motor.


Though limited to local flying in calm conditions, it has a quiet magic carpet appeal.
Click to expand...

Riggerrob, here's a belated response since this thread got some recent likes so I took another look at the last few replies.

If you want to go with a V-strut set up, triangulating the loads to the *rear* cockpit bulkhead would also be an option. Yes, cockpit access is still awkward and the front strut is longer and will have to be stronger but wing folding could be much simpler. With a vertical hinge line from the V-strut attach point down to the rear spar attach point, you could pull the main spar attach pin, and fold the wing right back still well-supported by the V-strut. Ditto the other side and Bob's your uncle. 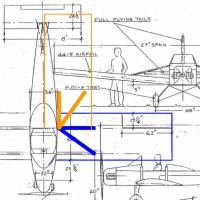 The system is much like that used on many biplanes of the 20s and 30s, but with one less pin to remove each side and no need for jury struts thanks to the V-strut. You'd need some upsweep to the rear fuselage to make space for the folded wing and manual flaps at the wing root trailing edges so the wing doesn't hit the fuselage.

Alternatively, and more simply, you could raise the lower longerons aft of the wing so the wing doesn't hit the fuselage and provide a removable fairing like an upside-down turtledeck. You could even put the whole wing below unbroken longerons, model airplane style, though you’d need really big rubber bands. ;-p That’s actually not that different from the way the Tipsy Junior was built.

Of course, you can do the same thing with a cantilever wing with a big box spar, but those rear hinge points have to be very strong and stiff to take all the weight and twist of the folded wing.


Riggerrob said:
Callair, Fleet Fort, Ryan PT-22, Spezio Tuholer, Stitts Playmate, Volksplane and many crop dusters.
We seem to have talked oursleves in a circle.
The primary addition to a 21st century Volksplane is a stiffer cockpit structure to reduced wing twisting. I often thought that V-struts would serve that purpose by triangulating wing loads to the instrument panel bulkhead.
A secondary advantage is easier broading over the trailing edge.
A third advantage is easier wing fold, more like Stitts Playmate. Routing control cables along the rear spar simplifies un-folding.
Click to expand...

I still favor the minmax setup with the underwing struts bracing the gear.

Lift struts/wires should NEVER be attached to the UC, from memory, there was a recent fatal in a Bowers Flybaby involving failure of the lifting wire attachment to the UC caused by landing damage/fatigue.
T

If think never is pretty strong. The Fly Baby is way more vetted than Just about any other traditional plans built plane. You can break every airplane. Not hard. If you don’t understand your airplane, it’s the wrong airplane.
R

That arrangement maybe OK if you fly from a well maintained airfield, contact with a branch or rock won’t end well.
T

Why would you be flying that plane to hit a branch or rock? It’s not a a back country flyer. Yes the gear is part of the load structure. Lots of spam can pilots don’t understand what not certified means. They really don’t know they are technically less safe by association. Doesn’t matter what homebuilt. There is no standard of airworthiness except the hope of the builder.

I don’t know the exact story of your example, but I expect a lot has to do with aging aircraft and a pilot treating it like a school C150, especially if it doesn’t have big Cub tires on it . There have been cable issues and rotten structural issues. Build and inspection quality seems to be the bigger issues. The one around here sat in a garage for 50 years because the owner got caught by his wife flying their daughter around on a special baggage seat. Grounded by mom. It did get a recover, new cables and fix of the stab from a roof leak. Lot of trust in it as built when the new owner started flying it, the way I saw it.

Guilty as charged, but someone saying let’s go for a flight, in a strange plane, is almost always a yes. No clue of what is inside. Not a indictment of the owner, but one who jumps in. It’s actually really stupid and I have done it a lot more than I have said no. Even the best RV bought should have a cautionary eye on it. Not because it’s bad, it’s because it’s unknown.
R

rotax618 said:
Lift struts/wires should NEVER be attached to the UC, from memory, there was a recent fatal in a Bowers Fly Baby involving failure of the lifting wire attachment to the UC caused by landing damage/fatigue.
Click to expand...

There is not a pilot out there who hasn’t had the occasional bad landing, it is one thing to bend or otherwise damage the landing legs, but when they are associated with the primary load carrying structure of the wings it can’t be good.
T

If you discard Rutan and other glass or Vans, which is pretty much modern kit building, and built a homebuilt, numerically you built either a Pitts, Tailwind, FlyBaby , or a Stits. Every year, someone doesn’t change the bungee on their gear and wipe out their plane. If it’s loosing wings, a couple of people cracked the spars in their Citabrias. I believe a couple of Ercoupes lost their wings. It was not a bad landing, it was bad maintenance after a bad landing. Where it was in the chain of ownership, who knows. They are considered relatively tough airplanes. If you slip a swage or bust a mount, you are not being realistic of your flying. The biplane version uses the same gear with no wires. The gear doesn’t just collapse.

A re-design of the Volksplane should be an improvement of Bud Evans original, connecting the lift struts to the UC axle is a retrograde step.
T

I hope not added. One wood icon should not be mixed with another. No need. Just build the other plane.

The Vp needs very little to enhance it. If one are trying to make it an RV, one is coattailling the name.

We explored a lot of options and ideas in the 171 pages and over 3,400 posts of this thread. While I have lots of creative itches to scratch when it comes to homebuilt planes, after all this discussion my own thoughts on a 21st century Evans Volksplane VP-2 are pretty conventional:
The overall result would be something of a mash-up between the VP-2 and a Pataplume II with a little Siebel Hummel in the styling of the cockpit area.

Decide if it is single place or two place. If single place VW is fine if two place it needs a bigger engine to dissipate heat maybe small Aeromomentum . If single place 900lb gross max if two place then may as well go 1320lb. Yes please widen cockpit. The faster it goes the more critical the balance of the all flying tail? Tricycle gear as option for the savages. Toe brakes.
V

My opinion: With enough wing and attention to weight, a large VW can safely fly 2 people. Folks safely fly in Sonexes with two aboard all the time (and receive instruction like that, with a LODA, etc). Sonerai IIs and many other VW 2 place aircraft do it, too. I'm not saying that the Sonex is perfect for this, frankly for the mission of the modern VP 2 I think you'd want appreciably more span than a Sonex or Sonerai to give better climb and to demand less of the engine. Probably 26-28 ft span, maybe 120sf. 600lb empty weight and a no-kidding 1100 lb MTOW.
Lots of two place planes used to be produced and certified with 65 HP engines. A 2180cc VW engine can give 75 HP reliably for TO and climb. Sure, the prop will be shorter than what a C-65 can swing, but at typical climb speeds the 10 additional ponies will about make up for the difference in prop efficiency.
This is to be a modern Volksplane right? Assume 70-75hp for TO and 65HP in cruise and the engine will live a long time.
Make allowances for other engines, folks may prefer them, may need em for high DA operations, etc. (If you can fit an upright Suzuki in there it will save money compared to a laid down one).
Last edited: Jun 21, 2021
You must log in or register to reply here.
Share:
Facebook Twitter Reddit Pinterest Tumblr WhatsApp Email Link