Voidhawk9 said:
Oil can be seen stream out of the cowl from every outlet, and he reports loss of power. Though the latter could be a result of the prop pitch, that alone does not explain the black oil everywhere does it? The prop is, I presume hydraulic? But the engine is losing the oil, the two oil systems are not linked are they?

Anyway, like any good TV series, it is to be continued, though of course we know he gets it down safely.
Click to expand...

Engine and prop use the engine oil here. Lose oil pressure and you lose prop control which is very serious. Luckily the fine pitch stops here were set pretty coarse and he didn't seriously overspeed either to cause a catastrophic failure.

At 14.20 ish a mist can be seen coming from the r/h cowl, by 15.30 the black oil is streaming down the underbelly cooler scoop, is it possible a holed piston is forcing oil out of a breather, or a hose failure ?

OldRVFlyer said:
I was surpised that the "training" ATC tower did not ask the standard questions of the pilot when the emergency was declared: souls-on-board and fuel quantity/type? Perhaps the tower and PM had already coordinated this information to some extent but it is standard ARFF procedure to ask these questions.
Click to expand...

I don't know what ATC's protocols are, but I wouldn't want them asking all those questions when I'm that close to an emergency landing. Getting that info isn't important enough to distract the pilot at that point. But they've also talked with him, both tower and ARFF, so they probably know it's 1 soul and fuel type, if not amount.

It's kind of fun when they ask those questions when you haven't declared an emergency. Had that happen to me once. I guess they realized it was an emergency before I did.

That hot oil was flowing slow along the cowl flap. Must be low airflow back there with a big boundary layer wake dragging with the airplane.
Wouldn't the ECU limit redline rpm?
2

I'm not sure it could with the prop driving the engine.

I don't think the prop would drive the engine unless it was diving way beyond climb speed. The Fadec might control rpm. I don't know how it works.
R

BBerson said:
I don't think the prop would drive the engine unless it was diving way beyond climb speed. The Fadec might control rpm. I don't know how it works.
Click to expand...

The prop will drive the engine at climb speed.. I had an incident a few years back with my Subaru powered RV6. It has a 2:1 reduction drive. On climb out, I had a circuit breaker failure which killed power to the ECU. Aside from a loss of thrust, the engine RPM did not change much. My backup system worked, and engine power was restored in about 20 seconds......
With his prop, a lack of oil pressure will cause the prop to go to fine pitch, high RPM. At that point, the FADEC (or ECU) has no way of limiting RPM....
D

Although I suppose it's possible that the Garmin has a means of adjusting the static pressure. Then again, you wouldn't be able to do that until you've flown and have a baseline.

Why isn't the PSRU oil segregated from the engine oil? Loss of engine oil kills the prop and sends it to full high RPM mode... or the contrary which is loss of PSRU oil pressure takes the engine out? Neither seem acceptable. The prop is turning one rotating component can be turned into a centrifugal pump with a couple holes. No need to have fluid communicating with both. That fine pitch prop turning due to airspeed might as well be a parachute. Glide ratio calculated on wing characteristics matters not anymore.
Last edited: Feb 7, 2021
2

rv6ejguy said:
He lost the prop governor, nothing the ECU (or Peter) can do to stop the prop/ engine from turning. You can hear the revs rising even though power is pulled back. Scary stuff and he did a great job declaring the emergency early and getting down safely with the prop fine. Good thing he was high on this flight. Glad he and Raptor are in one piece..
Click to expand...

Somehow I missed your point in all that because I was thinking about other things. Now I get it. I was being dense earlier. I see how nothing could be done to save the engine in that situation. So it's either OK or not, but not because of anything done to prevent damage. Still interested to see if the engine shut itself down in an attempt to save itself, though.

Jay Kempf said:
Why isn't the PSRU oil segregated from the engine oil?
Click to expand...

Most aero engines share the engine oil supply and that's considered normal and acceptable. In my view, an electric MT C/S prop would be safer, lighter and more reliable in this application.

I understand most but in this case...
D

Jay Kempf said:
I understand most but in this case...
Click to expand...

It would require a hydraulic pump then to run the prop. More complexity and weight. Losing oil pressure from either engine or prop isn't going to turn out well. Peter needs to keep that oil inside... I think you need 50ish psi for the prop.
Last edited: Feb 7, 2021
P

Jay Kempf said:
I understand most but in this case...
Click to expand...

What benefit does a separate oil system add? Now you have two points of failure, two oil systems to cool and maintain and if you lose either the plane become a glider regardless.

Perhaps the tower and PM had already coordinated this information to some extent but it is standard ARFF procedure to ask these questions.
Click to expand...

I think ARFF is put on alert every time he calls for taxi .

Upon watching further, I saw how much oil was coming out around the exhaust pipe opening. I don't know how this didn't catch fire. Yikes!

With oil coming out of the side exits and front point of the lower exit duct, it would seem to be pretty far forward on the engine rather than the PSRU bearing casing just forward of the prop. 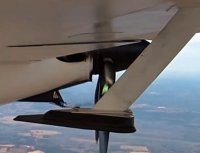 Looking at the Flight Aware data, looks like he was turning very tight at the end of the approach and coming down like a brick (1200-1600 fpm). I'm thinking pretty hairy with the prop like that, gear down and no power to boot. We'll have to see the next vid but from this, I'd say Peter did a great job getting it down in one piece.

For those asking why he didn't stray too far from the airport, this is why. Another mile away and he probably would not have made it. Lots to go wrong on a new design like this.
Last edited: Feb 7, 2021

Flyfalcons said:
A piston engine failure followed by normal landing does not qualify as an incident. An emergency declaration does not automatically generate a report.
Click to expand...

^^^^^ this ^^^^^^
An engine out that doesn't cause anybody any major problems is not an emergency at all.

I may have posted this before, please forgive the repetition if needed. Many moons ago, one nice day I had a spinner come off and lost some of the propeller on an RV-3, and felt I had to shut the engine down in flight. Landed the airplane in a local riverbed, managed to not damage it. Panicked, I immediately jumped a fence and ran over to a local store, and put coins into a pay phone to call the FAA FSDO office. I was terrified that they would come out and cut up my license in front of me. 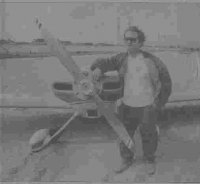 The conclusion is up. So the engine did actually stop, theory being that the turbo choked it. That makes sense. Last night I was thinking about those butterfly valves some diesels have to prevent runaway, wondering if it would make sense to put one in an airplane but didn't reach any conclusion. Seems like that was effectively what happened here and maybe saved the engine.

I am concerned about Peter's approach going forward. Considering trimming off the damage on the wing and making the other match instead of repairing the damaged side. Seems like a bad idea that would affect aero qualities. The engine stuff I don't know much about, but his commentary raised my eyebrows a lot.